"The Old Place of Sorbie"

Sorbie Tower lies in Wigtownshire, about a mile out of the village of Sorbie on the Garlieston road (B7052). It is situated close to an artificial defensive mound, known as the "Sorbie Motte" which was the site of an earlier pictish wooden fort dating from the 1100's. It is hidden in heavy tree cover and is easy to miss. The visitor approaches the tower up an unmade track through damp, marshy ground (wear strong boots!), hence the origins of the 'Sorbie' name ("a dwelling amongst swamps..."). The tower certainly is an imposing sight when it appears around the corner at the last moment... 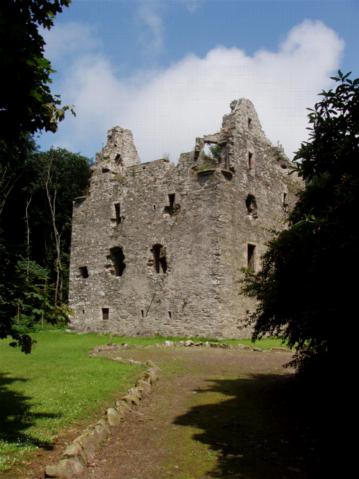 In 1965, a Mrs Jean Cummings gave the tower and the land around it to the Clan Hannay Society on the condition that it be held in trust for evermore. Since then volunteers have worked tirelessly to preserve the site. Well over £40,000 has been raised and spent on the tower and grounds and it is free for everyone to enjoy, tourist and local alike. Although a very substantial building, it still remains in a poor state of repair.

A conservation project is ongoing and the good news is that the Clan Hannay Society was successful with a heritage lottery fund grant from the Government of £77,400 to conserve Sorbie Tower. This was one of only twelve such grants to be made in Scotland in 2001. In the period since then the immediate area around the building has seen a marked improvement, not least the tarmacing of the approach road and the securing of the actual tower itself. The Clan Hannay should be applauded for the important work they have carried out in preserving the tower for this and future generations.

The present tower, an 'L' shaped building, known originally as the 'Old Place of Sorbie',  conforms to a standard type built in Scotland from the middle of the fourteenth century to the end of the sixteenth century, compact, but adaptable to changing requirements. In the earliest towers the walls were up to 8 feet thick, with defence conducted mainly from the wall walk and from projecting timber hoardings; by the sixteenth century defence is mainly from the ground level by hand guns and small arms, and the top level of the tower lends itself to decorative turrets and detail. 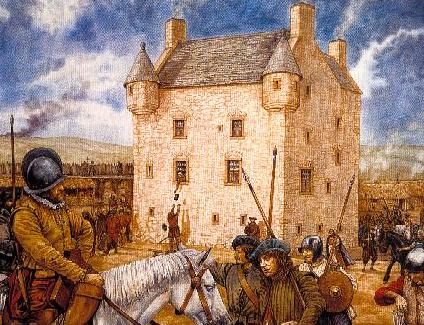 Reconstruction of Sorbie Tower as it appeared in the late 16th Century.

The style of the tower suggests a date of construction in the 1580's or 1590's, but a slightly earlier date is certainly possible. It is a lofty, three storey construction and has an attic in the main block. Its present ragged state gives no real indication of how the tower would have looked when it was inhabited. The entrance opens onto the bottom of the generous staircase. A small window to the right of the door lights the passageway to the vaulted kitchen which has a grand fireplace in the north gable wall, with a window. This floor also consists of three cellars. The great hall occupies all of the first floor of the main block. The hall would have been a majestic yet comfortable room, well-lit by many windows and warmed by the large fireplace. 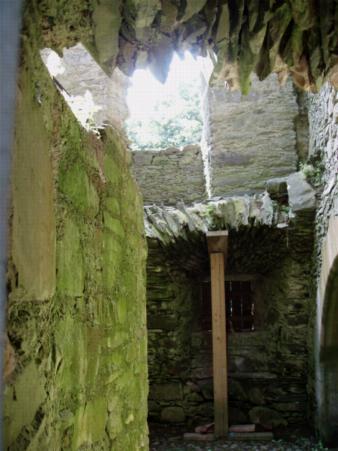 The Interior of the Tower - Sadly a far cry from it's former glory.

The site of the tower, with protection from swamp and water about it, was in itself perhaps an adequate defense against surprise attack. That such security was necessary even a very later date in Galloway is clearly illustrated by the turbulent history of the Hannay family in the sixteenth and early seventeenth centuries. Many family members were involved in bitter feuding and a number were slain in violent circumstances.

There is no direct evidence to show that the Hannays held the lands of Sorbie until the middle of the fifteenth century, but clearly there was a family with that name in the area long before that time. The earliest known Hannay at Sorbie seems to have been Ethe Hannay of Sorbie, pre 1460-1485, who was succeeded by Robert Hannay, who acted for his brother-in-law, Quentin Agnew, as sheriff of Wigtownshire in 1498/99, and was certainly a person of considerable importance. 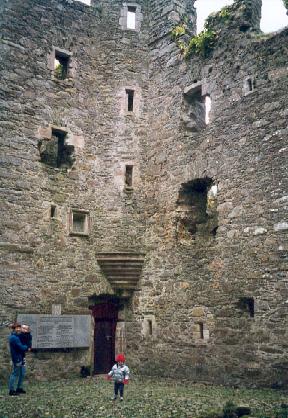 Sorbie Tower from the reverse side. The 'L' shaped structure can clearly be seen.

The Hannays were at the height of its power and influence about the middle of the sixteenth century, with wealth accumulated partly from the acquisition of church lands, but perhaps more significantly from territorial expansion in the Machars area, partly through marriage, and perhaps most important of all from active participation in trade and mercantile endeavour in Wigtownshire.

Alexander Hannay of Sorbie, who took over lands of Sorbie in 1569, and who was dead by 1612/13 may well have built the Old Place of Sorbie. It was, ironically, his feuding and violent disputes with his neighbours such as the Murrays and the Kennedys, which brought about the initial decline of the fortunes of the Hannays of Sorbie. His son, John, who was killed in 1640, revived and continued these quarrels, and much of the Sorbie estates were sold in 1626 to Sir Patrick Agnew of Lochnaw, lands later deeded to the Stewarts of Garlies, who finally took over the tower in 1677. The last resident was Brigadier-General John Stewart, M.P. for Wigtownshire in the British Parliament of 1707, who held the Old Place from 1695 until his death there on 22nd April 1748 and who is buried in the Old Kirkyard. 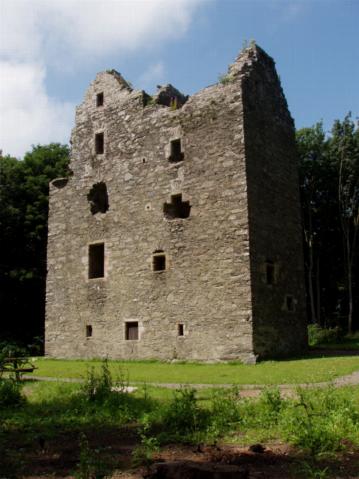 The Tower seen from another aspect - Still an impressive structure.

The Clan Hannay was formed officially in 1959 and are a very active and energetic society. The 2001 annual reunion was to be held at Sorbie on May 26/27th, however it was cancelled due to the 'Foot and Mouth' disease outbreak which affected livestock in the whole area. The event was rescheduled for October. All gatherings since then have passed off successfully. For more details, the Clan Hannay official website is well worth a visit www.clanhannay.com 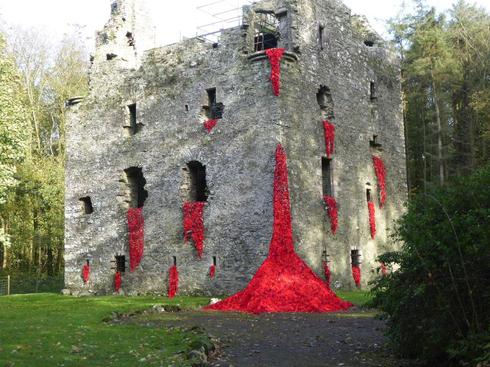 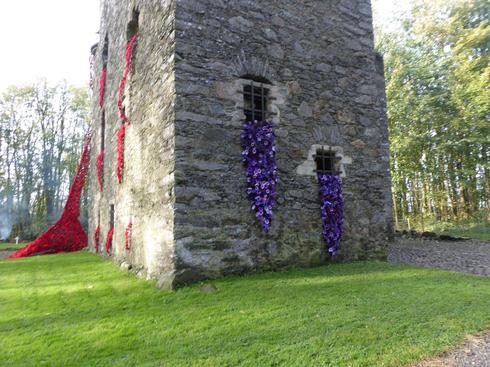 Here are 2 superb images of the Tower, taken 11th November 2018 on the WW1 Armistice Day Centenary.

In November 2018, the 'Weeping Poppies' display was organised by volunteers who were asked to crochet or knit 9000 poppies to commemorate exactly 100 years since Armistice Day. They received donations from America, Australia, France and of course the local townsfolk. In the end they got over 14,000 poppies, which meant there were plenty to sell them to raise funds for the Poppy Scotland appeal. The whole thing was arranged by Sorbie Tower (Tower Warden, Steve Hanna), The Women's Institute and Poppy Scotland. What a magnificent effort!

A special thank you to Jan Trotter who lives in Sorbie Village who provided the photographs.

Acknowledgement to various Clan Hannay websites for excerpts used in the above synopsis.

Return to 'Origins of the Name'