The 5th UK Sorbie gathering was held on Saturday 3rd July 2010 at St. Serf’s Church Hall, Edinburgh. Located on Ferry Road, Leith on the Northside of the city. It was an excellent venue for the get-together looking out towards the imposing Edinburgh castle in the distance. Previous gatherings had been held in Lanarkshire but it was felt we should take the show on the road and hold it in Scotland's capital.  Edinburgh has numerous links with the Sorbies as the family tree bears testament. Many individuals have migrated east from the Sorbie heartland to Scotland's capital for work, social or family reasons. In addition there are also very strong links to the surrounding areas of Midlothian, Clackmannan and Fife.

In total 30 people made the trip from all over the UK plus one overseas visitor, Isabel Thomas from Vancouver, Canada. Following a spell of warm weather, the sun again appeared to herald another successful event. The church hall was an ideal size and layout for the afternoon's proceedings. 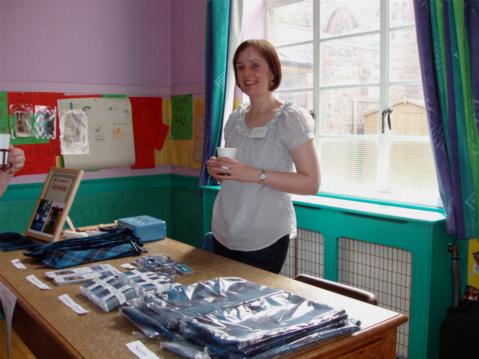 The assembled Sorbie 'cousins' were welcomed by an opening address from Muriel Sorbie who lives locally and is a member of the St. Serf's church. Following this, your 'webmaster' Andy Potts presented an summary of the recent work carried out on the Sorbie Family tree and website. The tree has expanded in size from 3,500 individuals at the first gathering in 2001 to an amazing 13,500 at the present day. A huge amount of work has been carried out and it is a fantastic repository of information on the Sorbie family. It also represents an important local history document as it includes links with many important South of Scotland and Lanarkshire families. 'Quality' is the crucial factor, with only documented and proven data included. More and more information is being made available all the time, so as time goes on we are continuing to piece the jigsaw together. As new family members come forward it is becoming easier and easier to fit them in.

Andy also paid tribute to Professor Charles Sorbie a respected family member who recently died in a tragic skiing accident in British Columbia. Born in Hamilton, Lanarkshire, he was an eminent Orthopaedic Surgeon based in Ontario, Canada and well known to our group. We were all very saddened to hear of his passing. 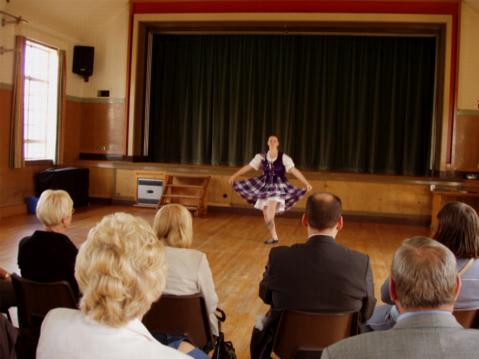 Highland dancing in the Church Hall

Following the opening speeches the assembled Sorbie 'cousins' moved through to the main church hall to be treated with a Highland dancing display by Susie Maxwell.  She is a pupil at Mary Erskine School in Edinburgh and gave a very polished performance. 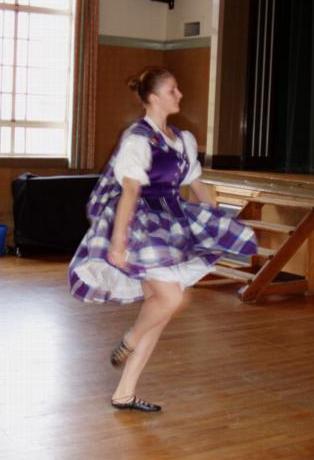 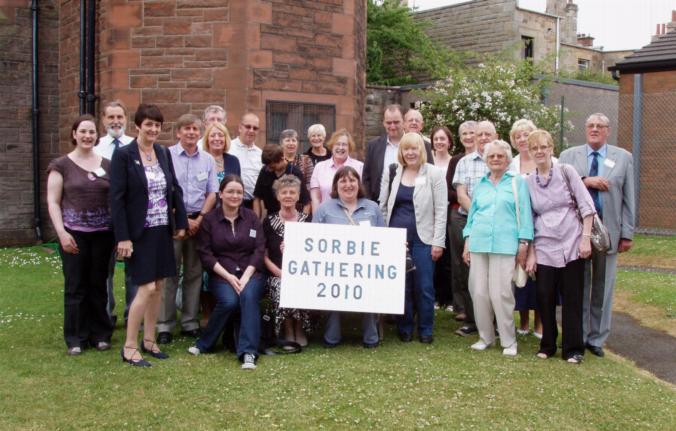 The attendees then made their way to the church garden to have a group photo taken to document the day. For some it was their first gathering and they were delighted to make the acquaintance of new Sorbie family members. People were surprised to find how closely related they were and were keen to exchange family information and phone numbers so that contacts could be followed up. 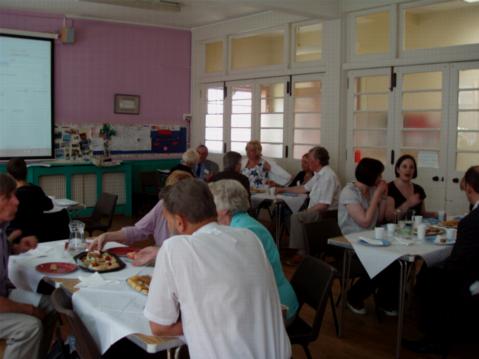 Lunch in the Church Hall

Following the 'Team' photo, a buffet lunch was served and it was the perfect time for people to chat and get to know each other. More than anything else this is the principle reason for the Gathering. It really is an important social event and proves the point 'it's good to talk'. Everyone was made to feel welcome and had a great sense of belonging, striking up an instant rapport with the other attendees. A number of cousins had also brought photos and other family documents and were keen to swap stories and confirm where they fitted into the Sorbie tree. 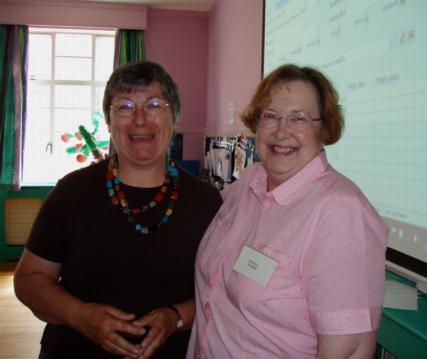 Pleased to meet you - Maggie King (left) and Muriel Sorbie 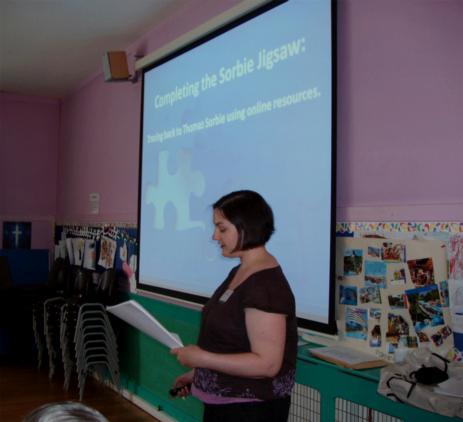 After lunch, Fiona McGregor, a Sorbie descendant gave a fascinating talk on genealogical research and how on-line resources can be used to trace your Sorbie ancestry. To prove the point she highlighted the family lineage of a number of family members in the room and showed how they were all descended from the marriage of Thomas Sorbie and Janet Thomson in Stonehouse in July 1797. It's over 200 years since then, but the Sorbie family tree already records over 4,350 descendants of this couple. Without a doubt there are many thousands more. In fact the majority people in the world with the surname 'Sorbie' are descended from these two individuals. So a big "Thanks" to them! 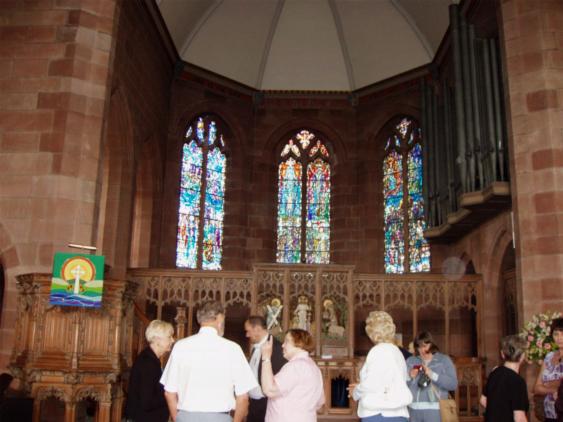 The interior of St.Serf's Church

Following Fiona's presentation, Muriel Sorbie took the attendees on a tour of the church itself. It was built at the turn of the twentieth century, at a time when the surrounding area was being developed. An architectural competition was held for the design of the church, the winner being an Edinburgh architect, George Mackie Watson. The church was built in 1901, and a single storey extension was added in 1924. After World War II, a new hall and other accommodation was added to the north of the church itself. The hall has for some years been used as a venue for Edinburgh Festival Fringe theatrical productions.

Saint Serf himself was a Scottish Bishop who lived from around 490 to 550 A.D. After travelling to Rome followed by parts of England and France, he returned to his native land and was particularly active in the West Fife area. This was mainly around the Town of Culross which he is said to have founded and where he is reputedly buried. His mission was to convert the local pictish (celtic) people to Christianity and to this end he set up a thriving religious community. 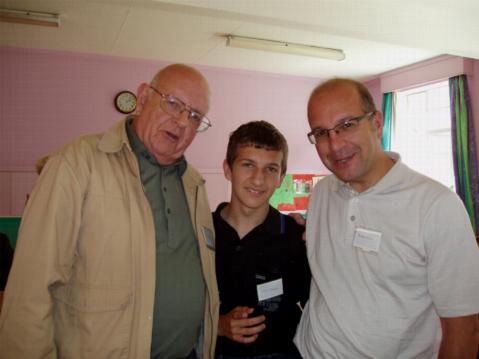 A welcome surprise on the day was the attendance of three generations from of the same family. John Fleming Sorbie, his son Brian and grandson Craig travelled from Dumbarton and Renfrewshire to their first gathering. They brought along some documentary evidence on their own branch of the family but were surprised to learn they were already recorded on the Sorbie tree. However they were able to provide some new info The other attendees were certainly delighted to meet them and welcome them to the event. Their own particular lineage is through John Sorbie and then four different Gavin Sorbies originating in the mid 1700's. 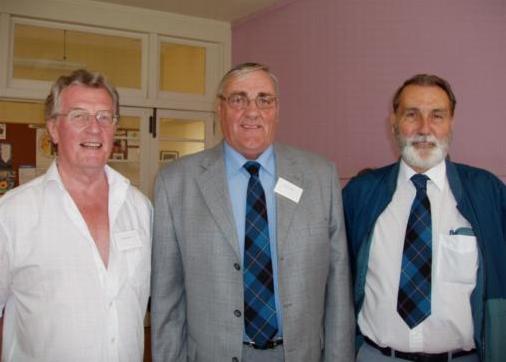 Following the tour of the church Muriel and Andy made their farewell speeches and thanked everyone for travelling from far and wide. It had been a really enjoyable day and lots of new friendships forged. We expect another gathering to take place in a couple of years as we enter our second decade of Sorbie gatherings. As a final memento of the day all those attending collected a presentation 'gathering' bookmark. This has become a real tradition and is the fifth of it's kind to be produced. Maybe not a huge seller on e-bay but treasured by all those who have been to one of our family events. 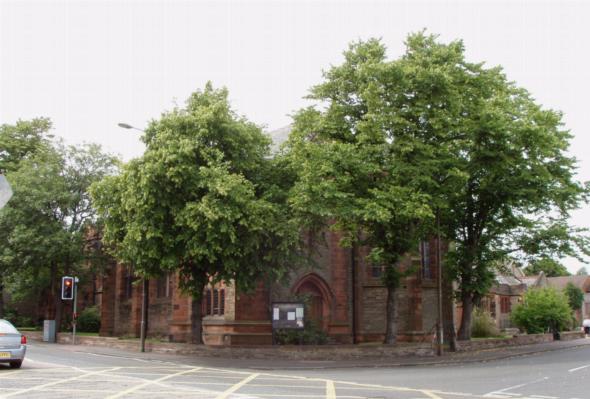 St. Serf's Church on the day of the Gathering. Harder to see this time!