On New Year’s Eve 2000 a ‘mini-reunion’ was held in Northern England with three Sorbie families in attendance. This sewed the seed of an idea to hold a bigger gathering the following summer in Stonehouse, the ‘spiritual home’ and town of origin of nearly all Sorbie families.

The idea was given real impetus in February 2001 when we were contacted from Montana, U.S.A. by Tom Langel, a descendant of Daniel Sorbie who emigrated from Stonehouse to the States in the early 1900's. Tom's mother, Joyce Sorbie Taylor, a native of Kenosha, Wisconsin, was keen to visit Scotland to see her father’s birthplace and the local area. We were happy to oblige and a plan was hatched to get a few Sorbies together to meet Joyce and family. This was how the idea began, however by word-of-mouth it rapidly snowballed and it soon became apparent that we had a full-scale Sorbie gathering on our hands. 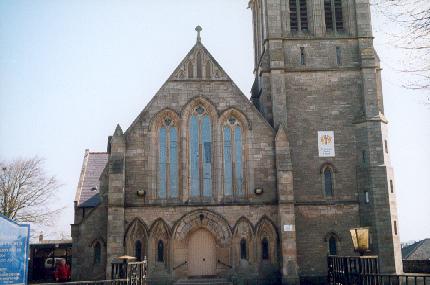 With the help of our cousin Tom Sorbie from Larkhall, such a get-together became a reality. Tom spread the word around the Stonehouse area and the number of ‘cousins’ interested soon mushroomed from 40 to 50 and then beyond the 70 mark. Our 'man on the spot' also secured St.Ninian's Church Hall, Stonehouse for the date of Saturday 2nd June 2001 for the location of what was to be the first formal 'Sorbie Family Gathering'.

Tom continued to work tirelessly as the day approached, making all the arrangements and liaising with the Church Minister, the Rev. Tom Nelson and his colleagues. As a bonus he also confirmed that his friend, Councillor John Young would give a presentation on Stonehouse and it’s history.

The Langel Family duly flew into Glasgow Airport from Chicago two days before the event and we were surprised and delighted to see that a total of eight people had made the trip from America. 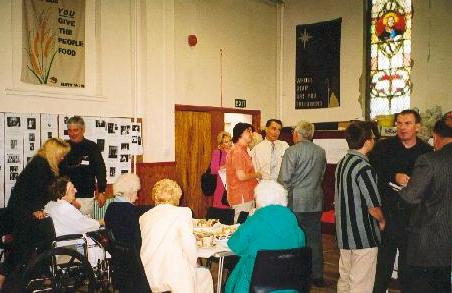 On Saturday morning,  June 2nd, the large church hall was suitably adorned with pages printed from the Sorbie Family website and a huge family tree, prepared by Hugh Robinson, measuring 85 feet in length which spanned two sides of the room. As family members arrived they were given a document outlining the day’s events and the purpose of the Gathering. 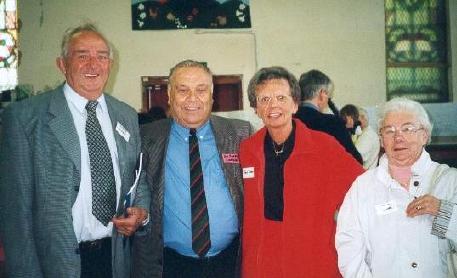 As soon as the attendees entered the hall they all made a ‘beeline’ for the Sorbie Tree and it proved to be an excellent talking point as they attempted to locate themselves on the chart. It was scrutinized closely and people were quick to point out missing details and provide additional information. A P.C. and monitor had been set-up in the hall so the tree could be updated immediately.

We were delighted to discover as the day went on that all those attending were indeed featured on the family tree, making us all ‘related cousins’, sharing the same Sorbie bond and lineage. One gentleman, Tom Sorbie, originally from Motherwell, Lanarkshire, but now living in London, had only a sketchy knowledge of his family lineage. However with the information he was able to give us, we were able to fit him straight into the Sorbie tree, giving him his descendancy back to 1740. Needless to say he was absolutely delighted with this turn of events… 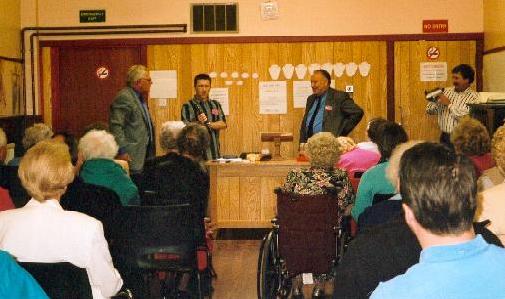 Family members were also invited into the church itself by the Rev Nelson to have a look around. Everyone appreciated the magnificent surroundings and the history of the building where so many of their forefathers worshipped and were baptized and married. The church, opened on December 18th 1897 is the 3rd of such in Stonehouse and a plaque on the wall bears testament to the fact. It lists all the Ministers serving at St.Ninians, from the present date right back to William Hamilton in the year 1540 (the old Kirk).

When all had arrived, the gathering were then summoned through to an ante-room where a formal welcome was made by Tom, Hugh and Andy. The ‘Sorbie Quest’ was explained and an overview given of the work carried out in recent months. 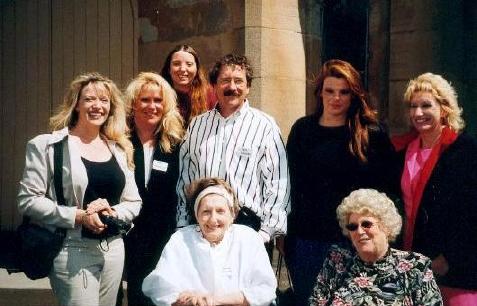 The Langel Family from the U.S.A. with Biddy Gardner (bottom right), visiting from Canada

The ‘Guests of Honour’ were also introduced. Our American visitors were extended a specially warm welcome and Joyce Taylor was presented with some superb framed pictures of ‘Old Stonehouse’. Gavin and Sadie Sorbie were then given a large bunch of flowers on the occasion of their 50th Wedding Anniversary (see ‘Paisley Sorbies’ in the 'Photo Album' section.) As a bit of fun, chocolates were handed out to the oldest and youngest family members, plus those with the most children (biggest contribution to the Sorbie Tree..!!). 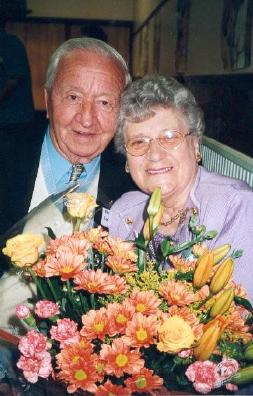 Finally Tom Sorbie was surprised with a 'personalised' Sorbie photo album in which to keep his photos of the day. He reciprocated by presenting everyone attending with a splendid souvenir book-mark which will serve as a fitting memento of the Gathering.

Following a hearty buffet-lunch kindly prepared by friends and volunteers, the ‘cousins’ filed outside for a group photo on the church steps. It was important that this was captured for posterity. 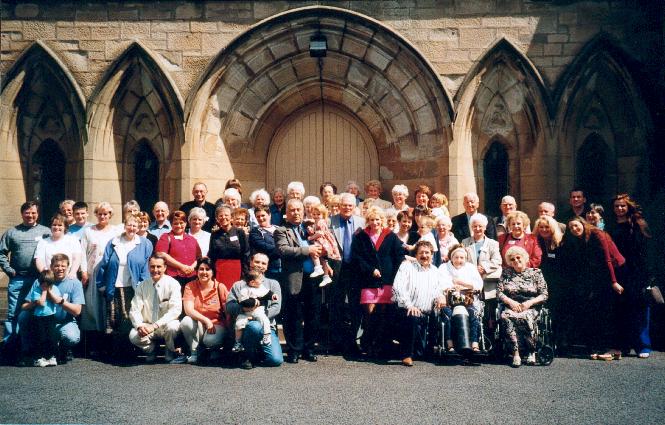 Immediately following, John Young, a local Councillor and native of the town gave us a fascinating and humorous talk on Stonehouse. Apart from presenting historical information, he regaled us with some local folklore and even ghost stories. John is an expert on local history and has already written two books on the town. Copies were available and a number were eagerly snapped up. 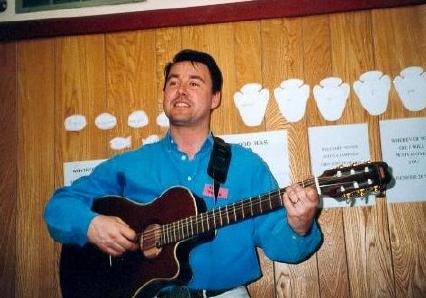 John Young and his guitar in full flow

In addition, John entertained those present by playing his guitar as he sang a few traditional and self-penned folk songs. A talented individual, one song ‘The Stonehouse Weavers’ was only written a couple of days beforehand and contained a reference to “Wee Tam the Beamer,” one of our Sorbie forefathers and a local character. Another, also in Scots dialect was about 'Stonhoose Perk' (Stonehouse Park). John’s contribution was extremely well received and was the ‘icing on the cake’ of the whole day.

After the songs it was time to draw the Gathering to a close and Gavin Sorbie rose from the audience to give a vote of thanks on behalf of all those attending. He thanked Tom, Andy and Hugh for their work in making the day a reality. He also praised John Young for his excellent contribution and all those helping out behind the scenes to make it such an enjoyable occasion. Gavin concluded by looking forward to the next re-union and hoping it will be as enjoyable as this one. 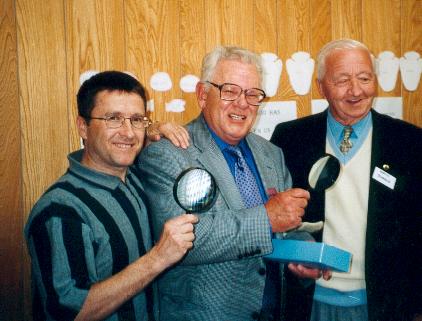 Tom Langel also thanked everyone for their hospitality and invited those present back to Kenosha and Montana for an American gathering. Gifts and mementoes were handed out to all attendees from Wisconsin, their home state. This was greatly appreciated by everyone and the souvenirs will adorn many a sideboard and window ledge in Stonehouse for years to come..!!  Finally Andy and Hugh were also surprised when they were presented with Sherlock Holmes magnifying glasses, courtesy of Elinor Sargent, as a tribute to their ‘sleuthing’ on the Sorbie family tree. 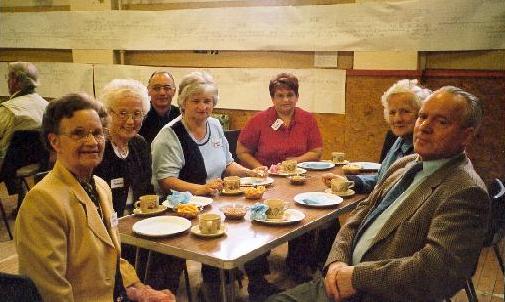 To conclude, Seventy Five guests were in attendance and the whole day was a huge success. People went away with a real sense of family and belonging. The event  was the 'talk of the town', with Tom receiving congratulations and phone calls from many parties including the church minister, Rev Nelson. Many friendships were rekindled and 1st and 2nd cousins met for the first time.

For example, Maggie King from Essex and her sister Biddy Gardner who was visiting from Canada, met their 1st Cousin Jean Baker from Stonehouse for the first time. The ‘Sorbie Quest’ made that possible and they will now keep in touch with each-other. 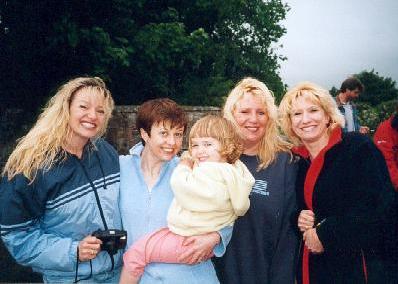 American and Scots Sorbies. "Nice to meet you"

It was the perfect opportunity for local Sorbies and the expatriate variety to get-together and forge closer links. The 'Sorbie Quest' will also benefit as family information was gathered from those attending and will be incorporated into the ever-growing tree.  One of our main goals is to tie-in as many living Sorbies as possible, so the relaxed atmosphere of a social gathering helped enormously to gain the confidence of family members.

‘Cousins’ were also provided with forms that they could take away and fill in family information. They can then be returned to Andy for incorporation into the family tree. Contact details were also obtained and these will be followed up in the forthcoming weeks. Family members will be visited and their individual Sorbie lineages discussed. The occasion was made complete by the presence of the eight Sorbie descendants from Kenosha, Wisconsin. It was a fantastic experience for them and they will have plenty of memories (and photographs) to take home with them. 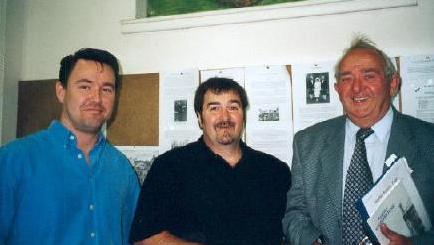 We hope that the re-union will expand in size in the years to come as the Sorbie family re-discover it's roots and sense of belonging. It maybe that a Gathering can also be arranged in North America in the next year or two so that our transatlantic cousins can get together with visitors from these shores. A number of U.K. based Sorbies are already planning a reciprocal visit in the not too distant future.

Whatever side of the ocean such an event is held, all those attending can expect a large helping of Sorbie hospitality and the promise of a thoroughly enjoyable time. The common family bond that used to exist in the ‘old days’ in the close knit communities of Stonehouse and Lanarkshire has hopefully been re-kindled and now has the chance to flourish. 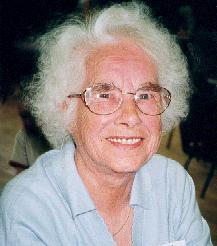