The Flight of Rudolf Hess 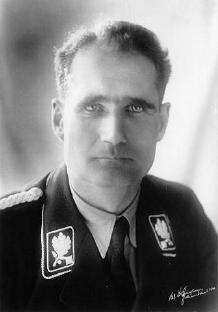 Just to the north west of Stonehouse, Lanarkshire lies open moorland and here was played out one of the few unresolved mysteries of the Second World War, which still continues to generate huge controversy. On the night of May 10th 1941, Hitler's deputy, Rudolf Hess, bailed out of his aircraft, a Messerschmitt 110, after a five hour, 900 mile flight and parachuted into a field at Floors farm, near the village of Eaglesham on Fenwick Moor. The motive for this seemingly bizarre event still serves to baffle military and political experts to this day.

A fact not known to many was that the late Jack McKenzie of Lockhart Street, Stonehouse was the man responsible for his capture. During his service in the Post Office, Jack joined the Territorial Army as a member of the Royal Signals and was then called up for military service at the outbreak of war.

Posted initially to Stirling Castle and thence to Eaglesham House, it was here Jack played his most notable contribution to the war effort, when Corporal of the Guard, Jack McKenzie and his guards captured Hess just after his plane crash landed. Hess told Jack and his men in English "I have an important message for the Duke of Hamilton"

They then took Rudolf Hess to a nearby farm house owned by a Mr David MacLean. Hess was offered tea at McClean's cottage before being taken into custody by the local Home Guard. Jack’s Signals Unit was also responsible for tracking the plane from the North of England, as they were responsible for alerting the Anti-aircraft defences South of Glasgow. Despite this, Jack’s Signals Unit got no recognition for the capture of Hess, as it was felt the events could not be publicly revealed because their regiment only had a couple of rifles, supplemented by pickaxe handles for defence. The local Home Guard got the accolade as they were equipped with rifles. 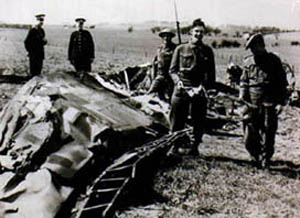 The official explanation of Hess's appearance on British soil was that the second most important man in Nazi Germany had gone mad and was on a desperate unauthorised mission to re-establish his failing career in the eyes of Hitler. More contentious is the claim that Hess intended to arrive at the small landing strip at Dungavel Mansion, home of the Duke of Hamilton, 14 miles further south-west, close to Strathaven. More recently this was the site of a prison which was closed down in July 2000. Authors believe that he was on a mission to meet the Duke of Hamilton, whom he met at the 1936 Berlin Olympics, to negotiate a treaty that would allow Germany to concentrate on the invasion of Russia. 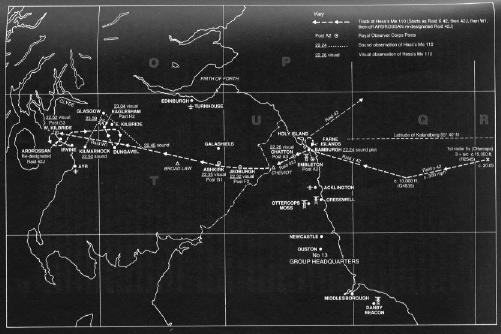 The flight path taken by Hess over the North Sea to Scotland.

The Royal Signals unit that tracked his plane across from the North of England was lead by Jack McKenzie of Lockhart Street, Stonehouse. He was the Corporal of the Guard that alerted the anti-aircraft defences south of Glasgow and mobilised the authorities on the ground that later arrested Hess at McClean's cottage.

Rudolf Hess was born in Alexandria, Egypt, April 26, 1894, the son of a prosperous wholesaler and exporter. He did not live in Germany until he was fourteen. He volunteered for the German Army in 1914 at the outbreak of World War One, partly to escape the control of his domineering father who had refused to let him go to a university but instead persuaded him into an unwanted career in the family business. 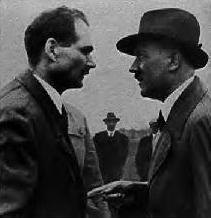 Hess served for several years as Hitler's personal secretary in spite of having no official rank in the Nazi Party. In 1932, Hitler appointed him Chairman of the Central Political Commission of the Nazi Party and SS General as a reward for his loyal service. On April 21, 1933, he was made Deputy Führer, a figurehead position with mostly ceremonial duties. Hess was a shy, insecure man who displayed near religious devotion, fanatical loyalty and absolute blind obedience to Hitler.

But over time, his limited power was further undermined by the political intrigue of the top Nazis around Hitler, such as Martin Bormann who were constantly scheming for personal power. As a result, Hitler gradually distanced himself from Hess. Hoping to regain importance and redeem himself in the eyes of his Führer, Hess set off on his ill-fated mission.

Hess flew a Messerschmitt 110 from Hanover.

Considerable mystery surrounded the Hess mission from the beginning and conspiracy theories have flourished ever since. Did Hitler know about it in advance? Did the British also  know of it, and was it part of a planned operation with elements of Britain's secret service to actively undermine Churchill and promote a negotiated peace? Were there powerful pro-German elements of society in Britain, including Scotland, sympathetic to Hess and his mission? What was the true nature of the Duke of Hamilton's contacts with Hess and other top Nazi circles in Germany? Indeed was the man who flew to Britain and later imprisoned in Spandau the real Rudolf Hess at all, or  a double?

When all is taken into account, and with the release by the British government of most of the Hess files, it appears that the simplest explanation is the most plausible. The eccentric and unbalanced Hess, aware of his declining influence with Hitler, hoped to re-establish himself by a dramatic coup that would, he deludedly believed, bring peace with Britain and save Germany

During interrogation in a British Army barracks, Hess proposed that if the British would allow Nazi Germany to dominate Europe, then the British Empire would not be further molested by Hitler. He insisted that German victory was inevitable and even threatened that the British people would be starved to death by a Nazi blockade around the British Isles unless they accepted his generous peace offer.

But Hess also displayed signs of mental instability to his British captors and they concluded he was half mad and represented only himself. Churchill, realizing this, and somewhat infuriated by his statements, ordered Hess to be imprisoned for the duration and treated like any high ranking POW. Hess was declared insane by a bewildered Hitler, and effectively disowned by the Nazis. His flight ultimately caused Hitler and the Nazis huge embarrassment as they struggled to explain his actions. 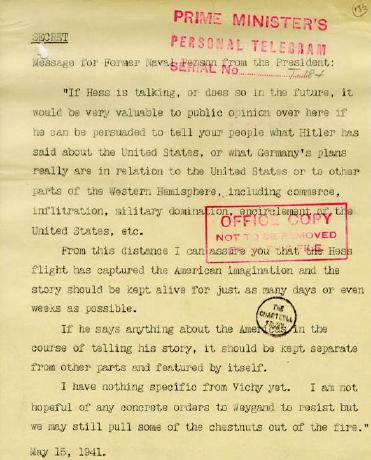 A telegram from President Roosevelt to Churchill hoping to maximise the 'propaganda' value of Hess' capture.

During his years of British imprisonment 1941-45, Hess displayed increasingly unstable behaviour and developed a paranoid obsession that his food was being poisoned. In 1945, he was returned to Germany to stand trial before the International Military Tribunal at Nuremberg.

In the courtroom, he suffered from spells of disorientation, staring off vacantly into space and for a time claimed to have amnesia. In periods of lucidity he continued to display loyalty to Hitler, ending with his final speech - "It was granted me for many years to live and work under the greatest son whom my nation has brought forth in the thousand years of its history. Even if I could I would not expunge this period from my existence. I regret nothing. If I were standing once more at the beginning I should act once again as I did then, even if I knew that at the end I should be burnt at the stake…" 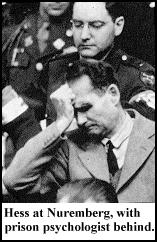 In spite of his mental condition he was sentenced to life in prison. The Soviets blocked all attempts at early release. He served his sentence in Spandau prison in Berlin, where from 1966 he was the sole inmate. Officially Hess died by suicide on 17th July 1987 aged 93, the last of  the prisoners to be tried at Nuremberg.

However marks on his neck found by later autopsies correspond to strangulation or throttling rather than hanging. Stories began to emerge that Hess had been murdered by British special agents. The theory was that the British government didn't want the Soviet Union to know that they had been planning a peace treaty to allow Hitler to threaten Russia in 1941. 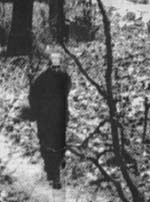 An elderly Rudolf Hess, taken in the grounds of Spandau prison, Berlin.

Of course all this is unproven as is the theory that the man in Spandau prison wasn't even Hess, but a doppelganger. Many experts believe that a look-alike had been substituted after the real  Hess had been killed in a plane crash over the Scottish highlands during transportation after  his capture. However that's if you believe it was the real Hess in the first place that made the flight from Augsburg airfield at 17.45hrs on that fateful night in May 1941, but that's another story...

For more information on this fascinating subject please click on:

A full account of this story has recently been published in the book "The Flight of Rudolph Hess" by Roy Conyers Nesbit.

Return to 'Landscape and History'