The first three decades of the 20th century witnessed the last great movement of peoples from and to Scotland. Between 1904-1913 a total of 600,000 people, almost 13% of the population, emigrated for North America and other parts of Britain. Between 1921-1931 a further 400,000 people departed, accelerated by the 'great depression'. These emigrants were often the skilled and educated members of Scottish society and they took with them much of the country's self-confidence. No other European country in the 20th century had to deal with such high levels of emigration.

There was a small degree of immigration, mainly from England; by 1911 English-born Scots made up 3.5% of the population. The 1900's also witnessed the tail-end of a large arrival of immigrants from Russia, Italy, Poland and the Baltic States, amounting to some 25,000 people. Immigration from Ireland had stalled and prior to WWI more Irish were probably leaving Scotland than arriving.

In the following pages we feature one such Scots family, that of Thomas and Jane Sorbie who sailed to America in the pursuit of a new life and what became of them in the following years.

"RMS Carpathia" One of the many ships that carried emigrants to America.

This was the era in which the traditional industries were beginning to wind down with the advent of mechanisation and new work practices. The weaving industry had been decline since the late 1800's and although many men had found alternative employment in the mines, this too had reached its peak in the years just prior to the first world war. In 1854 seven and a half million tons of coal had been brought to the surface in Scotland, by 1908 the figure had reached over thirty nine million. However the coal resources were not infinite and pits began to close down as coal seams were worked out. Men were losing their jobs in ever greater numbers and the promise of work in a distant land became difficult to resist. Stories brought back by émigrés working overseas served as an even greater pull on Scots families and individuals living close to the poverty line. These of course numbered many Sorbies among them.

Stonehouse like all towns in the Lanarkshire area was no stranger to this massive human exodus. The county ranked only 10th among Scottish counties as to area, but was by far the most populous, containing more than the next three put together and nearly a quarter of the whole population of Scotland. It was also the most valuable county in terms of land valuation and overall production; greater than the next two put together.

This meant that Lanarkshire was hit harder than most. The shocking housing conditions and poverty people were living in were becoming hard to bear and the promise of a new life and a new job often proved irresistible. As early as 1861, 100,000 people in Glasgow alone lived in single-roomed houses. In the whole of Scotland the total was a quarter of a million. It is not surprising that disease was rampant. In Glasgow from time to time there were outbreaks of cholera and typhus, and thousands died.

Tom Sorbie, born in Stonehouse in the 1930's, recalls his early childhood, "..many people lived in a room and kitchen type houses with set in beds (hole in the wall) and few bathrooms. Miners coming home dirty had to bath in a "bine" in front of a coal fire; not much privacy I guess...

Toilets were normal at the back of the houses, with no heating, condensation running down the walls, not a place to delay your visit!! Washing was normally boiling water, and pouring the contents into a basin, a few houses had outside  cold water standpipes. Heating was by coal fire and it could take some time to light, while the family shivered.

I keep telling my family they don't appreciate what they have, I do..." 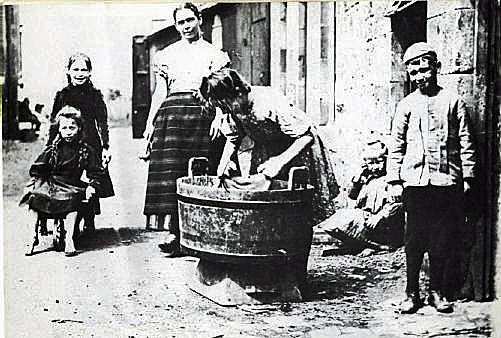 "Washing  out the bine"

The 'Sorbie Quest' has brought us into contact with descendants of Sorbie emigrées living all over the U.S.A. and Canada, from The Yukon in the far west to Florida in the south east. The majority of them have only been resident in North America for three or four generations at most, their forefathers having left Lanarkshire in the early part of the 20th Century. The immigration records of Ellis Island, New York shows 22 'Sorbies' arriving in the United States in the period 1892-1924, the majority of these from Lanarkshire.

It is also evident that many local men criss-crossed the Atlantic a number of times, coming back to Scotland when work dried up in North America. Often they had to leave their wives and families behind in search of employment and a decent wage. On numerous occasions upon their return their stories enticed friends and families to return with them, establishing pockets of Scots in places such as New York, Illinois, Michigan, Wisconsin and even Alabama. All these states had industries where Scots excelled such as mining, engineering and factory working. A letter that has come to light recently was written in the 1960's by Sorbie descendant John Summers (born 1884), describing his visits to the U.S.A. in search of work in the early part of the 1900's.

What has become apparent is the way in which the Scots quickly assimilated themselves into a foreign country and it's culture. Renowned for their ingenuity and adaptability they have made a success of themselves all over the world. The famous expression that "wherever you travel, you will always meet a Scotsman" rings very true.

Even in the pre-industrial era, the Scot was known in Europe as a student, a scholar, a soldier of fortune, or a trader. "Scotus Viator" he was called in Latin - "The Wandering Scot." It seems that these qualities are still there in abundance, even to this day.