The Loch, partly frozen over in December 2001.

Lochinvar (or Lan Var) is a small loch in Southern Scotland that is now a reservoir. It nestles in the hills of Dumfries and Galloway to the north-east of St. John's Town of Dalry. It is drained by the Lochinvar Burn, which flows south to the Water of Ken. The ruins of a castle stand on a now submerged islet within the loch which can be found by climbing up a narrow track close to a Power Station. The islet was submerged when the loch's level was raised as part of a project to supply drinking water in the late 1960s. The castle was the former stronghold of the Gordon family of Lochinvar.

The name Lochinvar is Scots Gaelic, Loch an barr, and means "Loch on the hilltop". Consequently it is stressed on the last syllable (unlike Lochinver). It lies 700 feet above sea level. From here it is an impressive sight looking south down the valley towards Loch Ken, past the town of New Galloway and onwards to the Solway Firth.

The place gave the name to a number of aristocratic titles including the Baron of Lochinvar, the Laird of Lochinvar, and most notably to "Young Lochinvar" in Walter Scott's epic poem Marmion.

The only sign of the historical importance of the place is a stone cairn by the roadside which has a plaque stating: "Lochinvar. Level raised 1968. An island now submerged was the site of a ruin. Stones from which have been used to build this cairn". 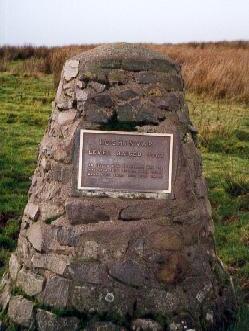 The Cairn at Lochinvar.

In the Register of the Privy Council of Scotland on 23rd Sept 1592 there is a "Charge to Lord Maxwell to restore to Sir John Gordon of Lochinvar and to certain of his tenants, goods reft from them". The letter of charge was executed on 1st October 1592 at the Lords dwelling in Dumfries and one of the persons mentioned being present at the time was Andro Sorbey, servitor to the Laird of Lochinvar. A 'servitor' was a male servant. The Laird of Lochinvar, Sir John Gordon, was the Chief of the Galloway Gordons and had his seat and a great deal of his property in Kirkcudbright. His ancestors, the anciently Knights of Lochinvar, owned the district called the Glenkens in the Stewartry of Kirkcudbright from about the 14th century. From there they branched out and became considerable landowners in Kirkcudbright and Wigtownshire.

Andro Sorbey's master, Sir John Gordon of Lochinvar was a supporter of Mary Queen of Scots. She appointed him Justiciar of the Stewartry in 1555. He was at the battle of Langside in 1568 which Mary lost and subsequently she had to leave Scotland never to return. In 1593 Sir John Gordon was commisioned with others to pacify the West Marches and establish good rule in the borders. With a boss like that, Andro Sorbey must must have seen quite a bit of action. It's very hard to find 'Sorbie' written as a surname so far back, so this is quite a find and a very interesting one. This is strong evidence on the side of an independent Sorbie family.

It certainly gives credence to the argument that the Sorbies were a family in their own right and not an offshoot of any other, such as the Hannays. The year mentioned above, 1592 was just before the time when according to family folklore, the Sorbies were supposedly banished from Galloway by James VI. Could Andro have had any involvement with this? 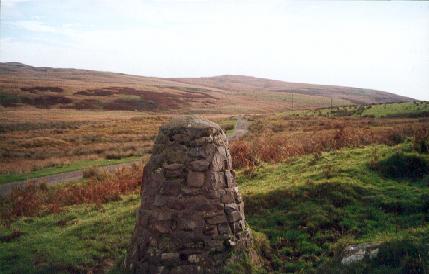 Looking south down the valley of the 'Water of Ken' towards St. John's Town.

Sir John Gordon was also on the jury in the trial of James, Earl of Morton for the murder of Queen Mary's husband Henry Darnley. It would also have been James VI (Queen Mary's son) who commissioned Sir John to establish good rule in the borders. So Andro must have had contact with King James as well. When Sir John died in 1604 he was succeeded by his son, Robert. Sir Robert Gordon of Lochinvar got into Court favour and was made a Gentleman of the Bedchamber after King James VI had succeeded to the English throne (In 1603 becoming James 1 of Great Britain) and moved to London.

Someone in such a high position as servitor to Sir Robert Gordon of Lochinvar would have been a very important job.  Its speculation, but there may be more than a possibility there could be a connection with the Sorbie banishment. Andro Sorby's master would have had a fair amount of contact with the Royal family, so being around as a servitor he must have had as well.  James was feared as a despotic and cruel tyrant. He could be highly vindictive if there was the slightest attack on his personal dignity, or any speech, lampoon or other writing, infringing his kingly prerogative.

For instance, in England, any man there, who wrote against the Scottish nation were shipped to Scotland, had their right hand cut of and then their head. Could Andro or a family member have caused offence to James in some way? James was a certainly a wee bit mad and maybe it rubbed off on Sir Robert when he worked for him. These theories should be considered. However it should be added that a look through 'Pitcairns Criminal Trials in Scotland 1488- 1624' does not throw up anything in connection with a Sorbie banishment. 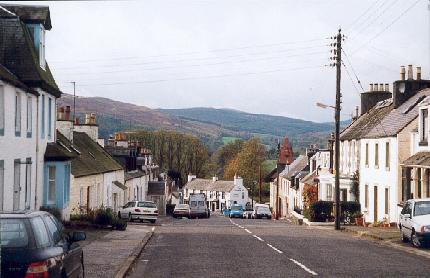 Entering St. John's Town of Dalry from the direction of Lochinvar. 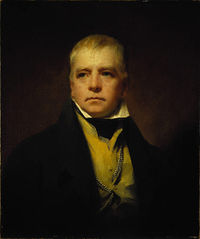 Scott was arguably the first English-language author to have a truly international career in his lifetime, with many contemporary readers all over Europe, Australia, and North America. His novels and poetry are still read, and many of his works remain classics of both English-language literature and of Scottish literature. Famous titles include Ivanhoe, Rob Roy, The Lady of The Lake, Waverley, The Heart of Midlothian and The Bride of Lammermoor. 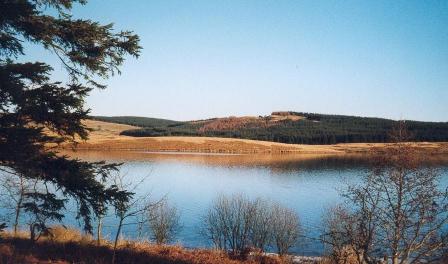 O young Lochinvar is come out of the west,
Through all the wide Border his steed was the best;
And save his good broadsword he weapons had none.
He rode all unarm'd, and he rode all alone.
So faithful in love, and so dauntless in war,
There never was knight like the young Lochinvar

He staid not for brake, and he stoppd not for stone.
He swam the Eske river where ford there was none;
But ere he alighted at Netherby gate,
The bride had consented, the gallant came late:
For a laggard in love, and a dastard in war,
Was to wed the fair Ellen of brave Lochinvar.

So boldly he enter'd the Netherby Hall,
Among bride's-men, and kinsmen, and brothers and all:
Then spoke the bride's father, his hand on his sword,
(For the poor craven bridegroom said never a word,)
'O come ye in peace here, or come ye in war.
Or to dance at our bridal. young Lord Lochinvar?'

'I long woo'd your daughter, my suit you denied;-
Love swells like the Solway, but ebbs like its tide-
And now I am come, with this lost love of mine.
To lead but one measure, drink one cup of wine.
There are maidens in Scotland more lovely by far,
That would gladly be bride to the young Lochinvar.'

The bride kiss'd the goblet: the knight took it up.
He quaff'd off the wine, and he threw down the cup.
She lookd down to blush. and she look'd up to sigh.
With a smile on her lips and a tear in her eye.
He took her soft hand, ere her mother could bar, -
'Now tread we a measure!' said young Lochinvar.

So stately his form, and so lovely her face.
That never a hall such a galliard did grace;
While her mother did fret, and her father did fume,
And the bridegroom stood dangling his bonnet and plume;
And the bride-maidens whisper'd, "Twere better by far
To have match'd our fair cousin with young Lochinvar.'

One touch to her hand, and one word in her ear.
When they reach'd the hall-door, and the charger stood near;
So light to the croupe the fair lady he swung,
So light to the saddle before her he sprung!
'She is won! we are gone, over bank, bush, and scaur;
Theyll have fleet steeds that follow', quoth young Lochinvar.

There was mounting 'mong Graemes of the Netherby clan;
Forsters, Fenwicks, and Musgraves, they rode and they ran:
There was racing and chasing on Cannobie Lee,
But the lost bride of Netherby ne'er did they see.
So daring in love, and so dauntless in war,
Have ye e'er heard of gallant like young Lochinvar?

Meaning of unusual words:
scaur=area of steep exposed rock on a hillside.

St. John's Town of Dalry, usually referred to simply as Dalry, is a village in Dumfries and Galloway, formerly in Kirkcudbrightshire. It is sometimes confused with a town bearing the name Dalry in North Ayrshire. It is a very old settlement lying on the main route of pilgrims travelling from Edinburgh to the ancient church of St.Ninian in Whithorn. Nowadays the travellers are more likely to be making their way along the 'Southen Upland way' long distance footpath.

It boasts a very pretty village and sits on top of a steep hill above it's churchyard which dates from 1832. At the bottom of the main street is the ivy covered "Lochinvar Hotel" which takes it name from the ruined castle and associated poem by Walter Scott. The town is located sixteen miles (26 km) from Castle Douglas along the A713 road, and is at the southern terminus of the A702 road (to Edinburgh). The village is about three miles (5 km) from the northern edge of the attractive Loch Ken. 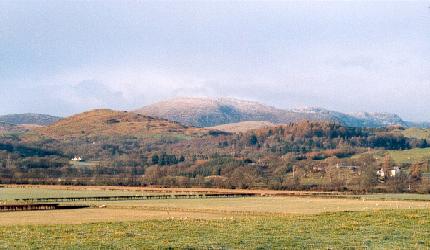 The Glenkens, with the 'Cairnsmore of Carsphairn' in the far distance.

This is the hill which Richard Hannay was pursued in John Buchan’s novel "The Thirty-nine Steps".

The Water of Ken is a river which rises on Blacklorg Hill, north-east of Cairnsmore of Carsphairn, and flows south-westward into the Glenkens valley, passing through Carsfad and Earlstoun lochs, both of which are dammed to supply the Galloway Hydro Electric Scheme. From there, the river flows south, passing St. John's Town of Dalry and New Galloway, before widening to form the 9-mile long Loch Ken. The River Dee also enters halfway down the loch, and from Glenlochar, at the south end of the loch, the river continues as the Dee west of Castle Douglas towards Kirkcudbright and the coast.

The engineer John Rennie (1761-1821) built a fine granite bridge over the river near New Galloway with five grand symmetrical arches. To the west, at Glen Luce can be found the grave of the original James Gordon of Lochinvar, - the 'Young Lochinvar'. 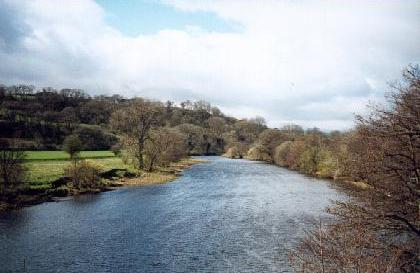 The Water of Ken, looking southward from Rennie's bridge at New Galloway.

Acknowledgment : Thanks to Thomas Sorbie of London for his invaluable research on Andro Sorbey.

Back to 'Landscape and History'