The USA gathering which took place on August 30th in Petrified Springs Park, Kenosha, South East Wisconsin was a great success. It was held in a 'shelter' area located in 360 acres of beautiful parkland with picnic tables and grills and a play-area for the children. Nearly 60 family members were in attendance, travelling from the local area and places much further afield. 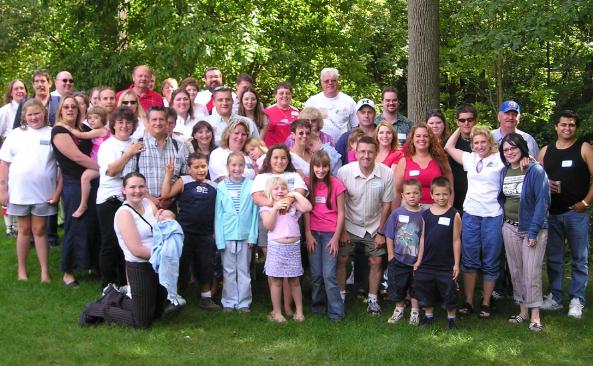 Kenosha lies on the shore of lake Michigan and is about 90 minutes drive north west of Chicago. It holds a special significance to Sorbie family members as two gatherings have been held here before - in 1974 and 1979. The American family members were getting together long before their UK cousins ever thought of organising themselves!

The Kenosha connection arises from Daniel Sorbie of Stonehouse, Scotland who settled here in 1919 with his wife Catherine. Initially Danny had travelled over to the neighbouring state of Illinois to work in the coal mines alongside many of his countrymen, but he later moved north when offered in a job in Kenosha. Danny was subsequently joined by his older brother Mitchell and wife Violet. Danny and Kate had one son and three daughters and have 94 known descendants, many of whom still live in the Wisconsin area. Ironically none of the living descendants are called Sorbie as the family line has been passed down through the female connection - mainly through the Langel and Clark families. 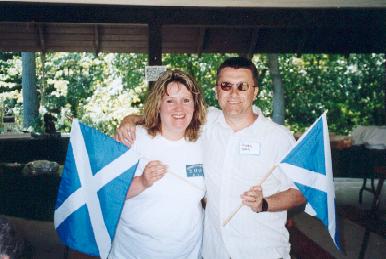 The gathering was organised by Carol Connolly, a great grand-daughter of Danny who lives in Salem, Wisconsin. Carol had previously travelled over with family members to the Scottish Gathering in 2001 and was keen to stage an event  for the USA Sorbies. American gatherings had been held in the '70's when the ties to Scotland were stronger, but subsequent generations had begun to lose touch with each other.

The word was spread amongst the 'local' family members, mainly amongst the family of Carol's mom Joyce Sorbie Langel. Joyce has 52 living descendants including their spouses, enough to form their own private gathering! Also other cousins were invited to attend from across the USA. A number decided to take up the invitation - after all, every Sorbie is related and all share a special bond. 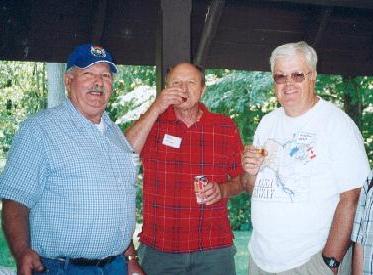 After the stifling hot weather of August, the Saturday of the Gathering brought cooler temperatures, perfect for the get-together. Travelling to join the local family members were Andrew and Donald Sorbie from Pittsburgh and New York with their wives, Debi Sewell of Maryland, Sheri Sorbie of Michigan, Jon and Julie Sorbie of Minnesota, Bob Munn of Illinois and Ron and Yvonne Hopper also of Illinois.

The shelter area was decked out with balloons and party streamers. Scottish flags on every table bore witness to  the ancestry of those attending and this was emphasised with banners and designs declaring "Welcome Sorbies". 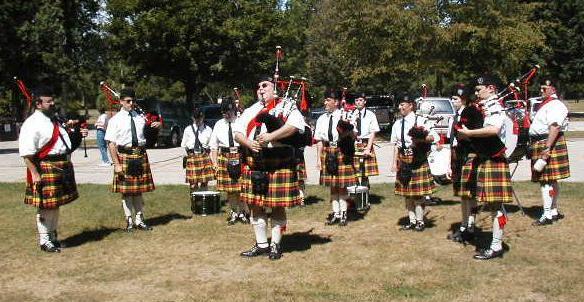 The proceedings opened with a major surprise when the Milwaukee Scottish Pipe Band arrived. Wearing full piper regalia and sporting the Buchanan tartan they treated the gathering to a stirring performance and drew an admiring crowd from passing members of the public. Their appearance had been secretly arranged by Carol and the gathered family members were delighted with their rendition of a number of traditional  Scottish songs. Some of the female family members were even moved to attempt Highland dancing! 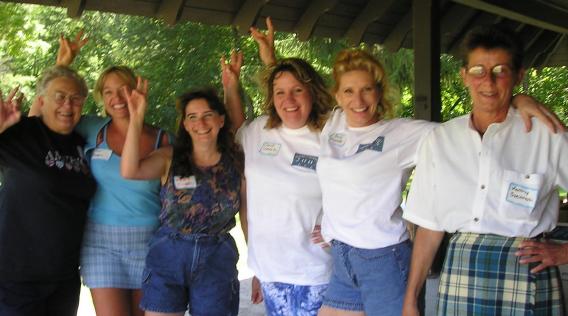 After the pipe band, Andy Potts visiting with his family from the U.K. gave a  talk on the 'Sorbie Quest' and the work being done on the family tree and website. He also paid tribute to Joyce Sorbie who had travelled to Scotland in 2001 despite being in ill health and had been the catalyst for the first Sorbie U.K. gathering. Andy was then presented with a special framed photo of the two Scottish gatherings and various souvenirs of his visit to Wisconsin. This was greatly appreciated as was the hospitality shown by all Langel family members on his family's two week visit to the States. 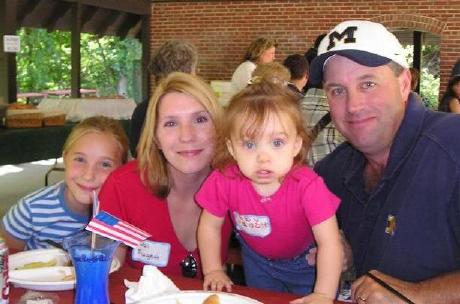 Mark and Valerie Fugett and family

Next up the gathering were treated to a superb buffet lunch and this was the ideal time for family members to meet each other and renew old acquaintances. Many were 2nd and 3rd cousins and had not met since childhood. Anecdotes were exchanged and stories retold. To help jog the memory Carol had created a display of old Sorbie photos and mementos of family interest. These proved to be a major talking point and a source of amusement when old photographs were seen for the first time in many years. 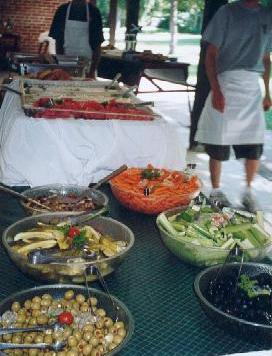 After the lunch a special cake was cut and distributed amongst the attendees. The cake was been dressed in the new Sorbie tartan and the design received unanimous approval. Everyone was delighted to see that the family now has it's own tartan and were keen to acquire items in the distinctive dark blue colour. Another surprise was when commemorative T-Shirts were unveiled by Carol, bearing the logo 'Sorbie gathering USA 2003'. These were eagerly snapped up as a souvenir of the occasion.

Finally a video was played showing scenes from the village of Stonehouse and excerpts from the U.K. gathering held only the month before. This was followed by filmed messages from the organisers of the Scottish get-together wishing their American cousins success and good health. This was well received by all those present who appreciated the kind gesture. 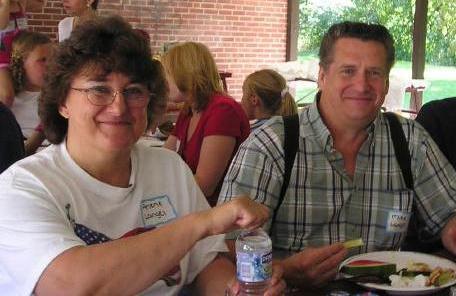 It had been a fantastic day and everyone agreed it couldn't have been any better. This was entirely due to the tireless work of Carol Connolly who put the whole thing together. Everyone felt a sense of pride in having such strong family connection and truly hoped that another get-together will take place in the near future. It is important that links are not broken and their common heritage is maintained. 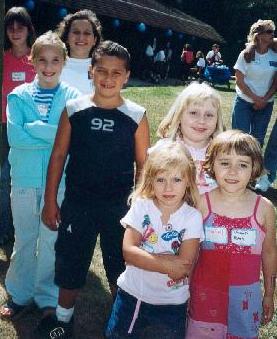 Younger Sorbies had a great time too..!!

Family members chatted through until the late afternoon and generally relaxed on a perfect day. The children took part in party games and struck up immediate friendships. All were disappointed when the get-together came to a close and those travelling greater distances had to begin their journey home. Local attendees were invited to travel the short distance to Carols' house and a number took up the offer to continue the festivities. 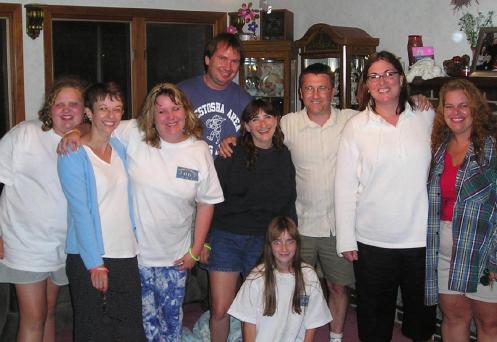 Family ties strengthened at the end of a special day

What had started out as a plan for an informal get-together ended up as a gathering to remember. Local family members enjoyed meeting their new cousins, many of whom for the first time. The closeness that exists between Sorbies in the U.K. is just as strong on the other side of the Atlantic. It is hoped that these gatherings will continue in the future and Scottish cousins will journey to America and vice-versa. Wherever they travel all Sorbies will be sure of a warm welcome.