Descendants of Thomas and Jane Sorbie

Thomas and Jane's 3 daughters remained in Stonehouse when the men folk departed for America. Ann, Jane and Margaret, born 1887, 1889 and 1892 all married local men and had 13 children between them. Margaret, married Alexander Wiseman Cook in June 1915 in Hope Street, Glasgow. As a miner he would have been in a 'reserved occupation' and would have been spared a call-up to the war. They had a son and three daughters, one of whom being Margory Sorbie Cook (known as 'Madge' to the family). Madge tells us that her father Alex was a very keen photographer and it was he that took all the splendid pictures of his wife's family featured on this website.

Margory married Jimmy Love from Larkhall and moved to the town, only 3 miles from Stonehouse. They had two daughters and a son. Her first daughter being named Margaret Sorbie Love after her Mother. Margory and her husband made a number of trips over to Canada to visit their daughter who was working in Toronto at the time. When there they regularly visited their American cousins. Margory recalled meeting up with John Munro  Sorbie who was a senior union official and was in Canada on business. They also attended the Kenosha family reunion in 1974 as a guest of Margory's uncle Willy Sorbie. 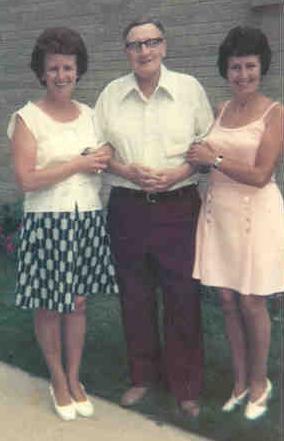 Margory, left and her sister Ethel, with "Uncle Willy" at the 1974 Kenosha reunion

Thomas and Jane's 2nd daughter, Jane was born on December 20th 1889 in Swinhill, a mining village, just outside Larkhall. Jane married Robert Stewart, a coal miner from Glasgow in early 1911 and they had 3 sons and 4 daughters between 1911 and 1924. Only three now survive, James Stewart, the youngest son and his twin sisters, Ann and Betty (Elizabeth). Jim is now in his eighties and his sisters will soon hit that milestone. They still live close to each other in Larkhall. 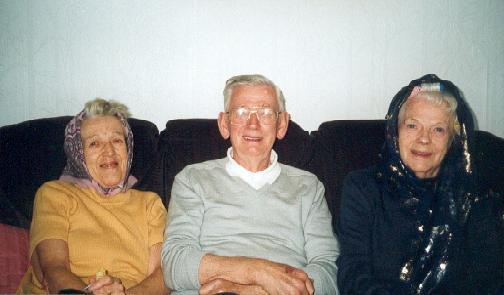 Jim married Betty Douglas; Ann, Willie McIntosh and Betty, Thomas McWhinnie. They have eight children between them. Madge Love, featured above, is their first cousin and they also talked about their uncles and many cousins in the U.S.A. They have received a number of visits from their trans-atlantic relations, including cousin Tom Sorbie and his wife Mildene from Kenosha, Wisconsin who came over to research their family history. They commented how musical their American family was and mentioned that Buddy Clark, a musician, whilst touring Britain with the Peggy Lee band, had called in to Larkhall to say hello. 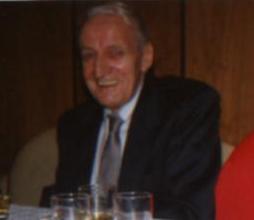 The son of Robert Stewart and Jane Sorbie and the older brother of Ann, Jim and Betty

Jim, Ann and Betty's uncle, Tom Sorbie, born in Stonehouse in 1885 was named after his Father and he is shown with the rest of his family on the Home Page of this website. He settled in Gillespie, Illinois where he married Jeanie Watt Brown in July 1917. As was the tradition in Scottish families he named his first son, Thomas. This was also observed by 3 of his 4 brothers; the other, Willy had no sons. The photo below shows a unique gathering of Six "Tom Sorbies". Tom, front left is surrounded by his namesakes who are his son and nephews. These are all the first cousins of the Scottish families featured  above.

Tom died in July 1952 at the age of 76, so we calculate this photo was taken in early 1950. Behind Tom is his brother Mitchell's son, born 1904 who hosted the 'Kenosha Reunion' in 1979 and standing next to him is Tom's own son, born 1919. He lived in Toledo, Ohio and was known as "Toledo Tom". He married Margaret Hamilton but had no children.

Standing right is Tom's' brother John's son, born 1921 who was from Alton, Illinois. Sitting next to Tom is his brother Daniel's son born, 1903 in Stonehouse, who was also from Kenosha, Wisconsin and known as "Fiddlin' Tam". The baby is "Alton Tom's" son. We are attempting to establish his birthday so we can date the photo even more accurately.. 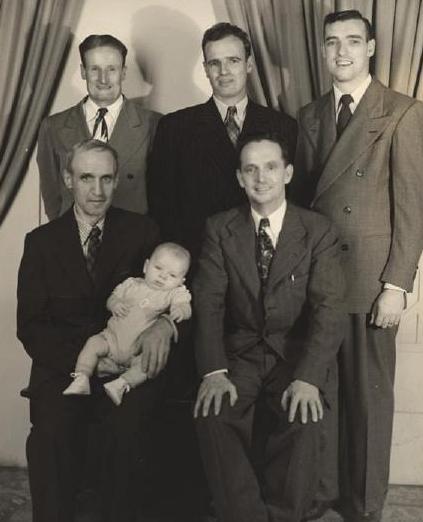 Back to 'Thomas Sorbie and Jane Burke'